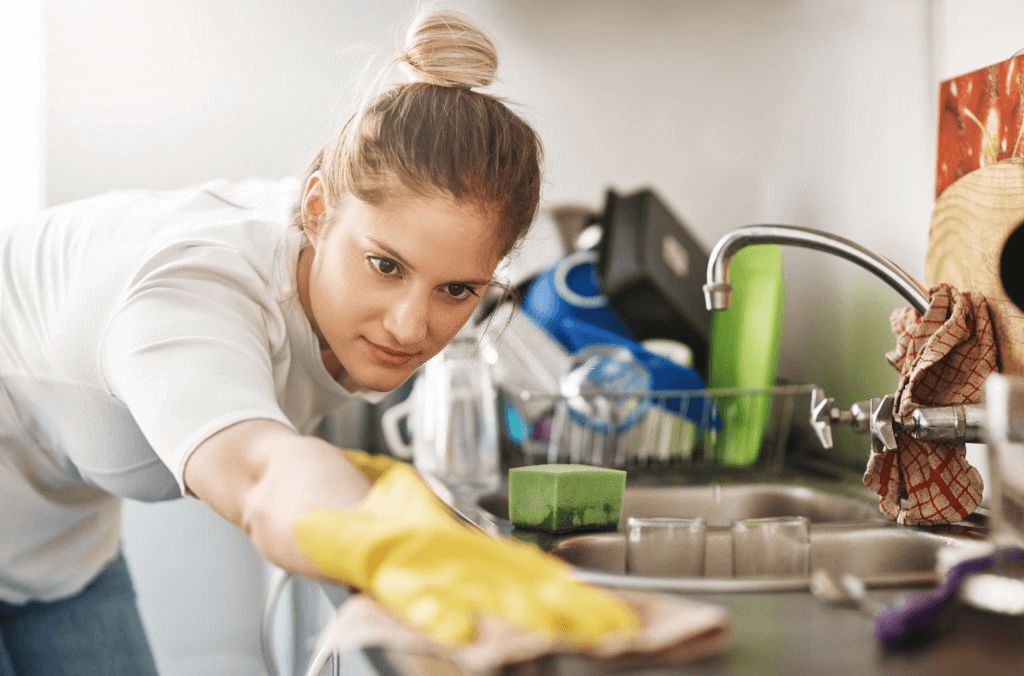 Sheldon Cooper from Big Bang Theory, Monica Geller from FRIENDS, and Kevin Casey from Scrubs. What do these three popular TV personalities have in common? They are all people with some sort of OCD. Also, they all seem to be clean freaks, which is essentially a form of OCD that is rather prevalent amongst many.

They tend to have to be clean and also need to have their surroundings be clean at all times before proceeding to any other task at hand. It is not an option for them, and it is clearly shown in these TV shows that they must have cleanliness their way, or it’ll drive them pretty mad. Does that sound like you? Or does it sound like a person, you know? Read more to find out more about this disorder!

Short for Obsessive-Compulsive Disorder, OCD is generally referred to as an anxiety disorder – worrying too much about certain things – that reaches a point in which your daily lives are negatively affected in one way or another. Let’s break it down further to get a better idea. Let’s start with Obsessions. In this case, obsessions are defined as unwelcome or intrusive thoughts/urges that occur repeatedly. These thoughts can range from simple things to completely bizarre and unique thoughts that you wouldn’t dare share with others. This way of thinking can even be obstructive to daily activities and even affect one’s ability to interact with people. Not to mention, it can cause a lot of frustration when such thoughts hinder you from focusing or concentrating on studies or even work.

Compulsions, on the other hand, are where your actions to deal with symptoms of your obsessions come in. Compulsions are repetitive actions that you feel are absolutely necessary to perform in order to avoid misfortune being bestowed upon a loved one or even upon one’s self. Compulsions aren’t exactly a direct method of dealing with the obsessions but instead aim to deal with the anxiety resulting from having obsessions.

A common mistake, I personally feel many locals make is that they “self-diagnose” or rather claim to have OCD when in actual fact, they do not. You see, obsessions and compulsions are completely normal for everyone to experience once in a while or even daily. It only becomes a disorder when those thoughts and actions collectively act to hinder a person from being productive or make it much harder to accomplish daily feats. A good example to show you guys as to what living with OCD is really like would be through this video. Take a look.

How Does OCD Happen?

Similar to my previous article about eczema, it is very difficult to point to one source being the main cause of OCD. To pin this disorder down to just one factor is like saying the only reason you eat certain food is to fill your stomach, which is totally false for most people. There are many theories as to why this phenomenon exists, but the fact remains that the causes of OCD are highly subjective and are a case by case basis sort of disease. Let’s quickly run through some of the suggested theories.

One theory suggests that personal experience could well be the main cause of Obsessive-Compulsive Disorders. Take, for example, someone who has had a painful childhood or having suffered a great deal from trauma. Obsessions and compulsions seem to be the easy route for the human mind to be able to relieve all that anxiety and fear they face. You may also have had parents or elders in a household who would have used such techniques to keep their anxiety at bay, prompting you to mimic those actions or methods. However, this theory would fail to explain such cases that don’t stem from a painful past experience. Thus, this theory was deemed inconclusive and hence sparking other theories that would attempt to rationalize OCD.

This theory suggests that OCD develops due to dysfunctional beliefs as well as distorted interpretations. In this case, the patient would tend to believe that they have more responsibility for certain things than they actually do. In other words, they tend to overestimate their own level of control or authority upon a specific outcome in an event. Examples are aiming to prove this theory would be a case in which some people may experience thoughts such as making too much noise when speaking to a friend when in actual fact, the tone of their voice is perfectly fine. This form of paranoia is common among most OCD patients. As a result of this paranoia, the affected person would likely attempt to reduce the effects of his/her overblown assumptions, leading to more anxiety and thus, leading to an OCD Cycle.

Yet another theory here suggests that it could be due to the lack of the brain chemical, serotonin. However, studies on this particular factor are scarce and are highly debatable as there seems to be much about the human brain that has yet to be unraveled by scientists. Causes like genetic factors could be it, but then again, it would fail to address the issue in that different people develop OCD differently.

How Is OCD Diagnosed?

First, you’d have to visit a general practitioner (GP) or a counselor to determine if it is necessary for you to see a psychiatrist or psychologist. A quick reminder to all that a psychiatrist is a person who deals with patients having mentally related disorders and is allowed to prescribe medication. This person would have to have studied to be a doctor and then would have gone on to specialize in psychiatry.

A psychologist, on the other hand, is only allowed to assess the mental state of someone and offer professional advice accordingly. This person is not licensed to prescribe medication and would often refer you to a psychiatrist if medication is indeed required. Of course, different countries have different laws that would affect the role of certain professions.

Having said that, some of the basic questions would likely be asked by whomever; it is that you consult. Here are those questions:

Sometimes it can be incredibly challenging to talk to people you know, let alone to strangers about your innermost thoughts or personal experiences. It does need to take time to open up to someone, but that is the only way for another to truly understand what you are going through. Hence, trusting your doctor is a very crucial first step needed to identify the problem at hand.

How Can I Help Myself?

There are many ways in which you could self-rehabilitate or greatly marginalize the effects of living with obsessive-compulsive disorder. Here are a few ways:

Books can be a very useful tool to help a person cope with anxiety and also learn more about OCD as well as how to refrain from worsening the condition. There are also options for every tech-savvy people who would rather stare at a screen instead of a physical book.

Now, I know for a fact that peer support groups when it comes to Malaysia are pretty hard to come by, let alone those related to mental health and even OCD. Alternatively, thanks to the wonderful platform in which I myself am able to reach out to you guys, there are several international online support groups.

Of course, safety is always a concern when dealing with online platforms, so I urge you all to be careful and safe when interacting online. If possible, refrain from giving out personal information as much as possible like full name, address, and of course, security passwords for social media platforms as well as phone numbers.

This method may not necessarily cure your condition, but it would definitely help in suppressing the symptoms or side effects of OCD. Breathing exercises and yoga are good ways to help ease anxiety, and you can easily find yoga classes to go to in Malaysia. Exercise also greatly helps as endorphins are released, naturally making you feel calmer and less stressed.

Often, a person’s OCD gets worse simply because they bottle up everything, refusing to let others in. A swift and gentle reminder to all that there is nothing to be ashamed of when it comes to things that are out of your control! It’s absolutely a normal occurrence and could happen to anybody at all. Opening up to more trusted people will definitely help ease your stress and anxiety, halting your condition from worsening.

What Can You Do To Help A Friend You Know/Think Has OCD?

The first thing is to make sure you don’t call them out on what they’re doing or immediately ask them to stop. That method almost never works and will only function to distance themselves from you. Talk to them and be patient. There’s very little you can do aside from being patient earn their trust. Once you’ve gained their trust, it’s much easier for them to open up to you.

Always remember that the goal of talking to them is to understand their viewpoint and to get a better feel of why they do what they do. If they don’t open up to you immediately or share everything from the word go, it’s fine. It really is because all of this takes time. All you can do in the meanwhile is to constantly assure them that you will always be there for them and that you are open to anything at all they want to talk about.

Of course, only do this is you are sure you want to and genuinely care about the person. Doing it half-heartedly and stopping halfway can really make their condition worse.

That is all for today, and I hope everyone gets a better picture of what OCD is. I apologize for the rather lengthy post this time, but if you’ve made it this far, congratulations to you! As always, feel free to add a topic to our discussion forum regarding this or any personal experiences you may have had in regards to today’s topic.

If you can totally relate to what was written here, do be reminded that you’re not alone! And neither are your friends. The power of human interaction can solve so many things! 😀

6 Best Things To Be Learn From Meditation

What Is The Importance Of Religion or Spirituality In Life

Are You at Risk of a Text Neck?

Jian Shao - May 8, 2020 0
Seems Familiar doesn’t it? Well, if you do hold your mobile device like this, it’s about time you stop because we have a 21st century problem at hand and it is known as Text Neck. Text neck? Yes, text neck. Text neck (try saying it repetitively and twice as fast for a fun tongue twister challenge) is [...]

Two Bananas a Day Keep the Doctor Away

The Reason Behind Your Stomach Pain: Lactose Intolerance

Who’s Up For Breakfast?

Alzheimer’s Did Not Spare Even the Former US President

May 8, 2020
© Getdocsays.com 2020. Most rights reserved.
We use cookies to ensure that we give you the best experience on our website. If you continue to use this site we will assume that you are happy with it.OkCookie policy